skip to main | skip to sidebar

Yeah, so I thought I would start my blog up again.  Why?  Well, that's a very good question and I don't have a very good answer.  I have:

The backstory:  Professional stage manager with children whose life hits a snag when the children become teenagers and she realizes that her only time to spend with them is when she is working.  It's Mildred Pierce meets The Guilt Trip...nope not even a little bit.

So I got a real job.  It took a while though.  Oh I'll tell you all about it another time.  In the meanwhile, my job now has it's benefits:  University, close to home (1.5 miles), nice people, etc.  I have a second job there supervising and teaching the stage managers of the theater department so I get to keep my toe in the water so to speak.

And I've got lots to tell you about aborted singing lessons, circus, boot camps, old age injuries (man they suck), fun new drinks, food, and all the other fun things you try in your 40's while screaming:  I'M NOT OLD YET! We'll talk.
Posted by Kate Hanley at 5:55 PM 3 comments: Links to this post

A View From the Other Side...

NOTE:  For those of you who came over from Theme Thursday, I linked to the wrong post on my first attempt so I'm listed twice.  Oops!  Sorry for the confusion.

My daughter's Junior High winter band concert was last night.  I slipped into my seat right before the lights dimmed for the first band.  I was coming from rehearsals in the city.

As I watched Clara on the stage, in her white shirt, black pants and silver flute, I was immediately transported back to high school and my own band concerts.  I played flute as well.  Meaning I played the flute but I don't mean I played it well.

This is what my parents did, I thought to myself, twice a year.  They sat in the audience and listened to barely recognizable music played enthusiastically by a group of mediocre musicians.  Oh, there were a few great performers in my high school.  Those who went on to All-State bands, who understood what a tetrachord is and who had perfect pitch.  But for most of us?  Not so much.

In addition to these concerts, my parents also attended all of my school plays.  I think it actually qualifies them for sainthood.  Forget martyrdom, try 2 high school band concerts and 2 high school plays every year for 4 years.  And, supporting me every step of the way and putting up with my overly-dramatic self whenever I was starring in one of the plays.  I had a lot of delusions in high school:  I could play the flute, I could act.

Whereas my concerts were band and chorus (I never joined chorus.  I, at least, knew I couldn't sing), Clara's concert was only band.  Each grade played 3 songs (my high school band consisted of all the cacophonous grades mushed together) with a couple of smaller ensembles in between.  To be honest, I enjoyed it, even the Journey song that Clara's band played (I can't stand Journey, I won't go into it).  But maybe because I barely recognized the tune when performed by a hundred, earnest, 7th grade musicians.

And, I don't mean to belittle music programs.  I am thankful that my children have this opportunity to learn an instrument, learn to read music, learn how to play in time with other people, and how to behave at a concert.  Although I was a horrible flute player, I have never regretted learning the instrument.  What I do regret is giving up piano.  Another story though.  I just never realized how great my parents were to support me in an endeavor that I clearly was not cut out for.

I watched other parents last night videoing the concert.  I never thought about doing it but now, I kinda wish I had.  Not to watch now of course, but to save and show Clara years from now in case any of her kids take band.  But right now, I'm looking forward to more band concerts and who knows....maybe a school play.

Kate Hanley
Sometimes life is perfect the way it is. Other times, you need a cocktail. 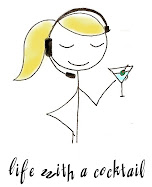